It's all about the numbers 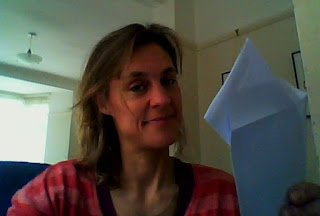 How fast?
In this soon-to-be-sealed envelope is my race time prediction for a friend running in her first half marathon tomorrow.

She’s written and sealed her own magic number too, but I’m willing to bet that my prediction for her is quicker than her own. Her prediction will be biased by nerves and caution and the unknown.

Mine however is based on the evidence of all the hard training she’s put in over the last few months, the times she’s already run, together with my confidence in her and her competitive spirit. Oh, and the weather forecast tomorrow.

How old?
I was asked this week by a young man if he was too old to run. This morning I took a group running and 2 guys showed up, neither had run since school days, and both were 76 years old. They were awesome, soooo awesome. It’s all about the numbers and these 2 x 76 year old new runners show that at 49, you’re most definitely not too old to take up running.

How much weight?
I also received an email from a lady I’ve been supporting online. Back in September she desperately needed and wanted to lose weight, we sorted out a food plan, and I promised her it worked. How do I know it works? Because this week she emailed to say she’s lost 16kg (that’s about two and a half stone to you and me). It works. No need to take my word for it, look at the numbers.

How many people?
In the last 8 weeks I’ve had the privilege of teaching 21 people how to start running. These 21 people have never run before (well, except for being forced to at some time or another in school, I expect). I know there are 21 of them because I’ve counted them. 21 people who had never run before are now running once or twice a week, and are even talking about signing up for a race event. With the right help and encouragement people want to and can learn to run, to get fit, to feel better. Don’t take my word for it, look at the numbers.

Running lends itself to numbers. What are your goals? Whether it’s a race time, holding back the effects of age, maintaining a healthy weight, celebrating freedom from addiction, or any number of other personal goals, running can help achieve them.

Don’t just take my word for it, look at the numbers J

Come and run with me, it might just change your life.
Posted by Jeychick at 12:22 No comments: Links to this post 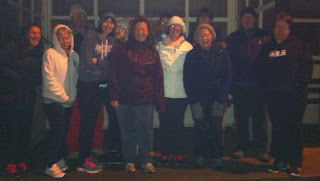 Let me introduce you to some awesome people – 15 came out in the nasty weather last night, and I’m so proud and grateful to all of you for letting yourselves be my running guinea pigs.

Why run? This lot will tell you that it’s more energy, walking taller, more confidence, less weight, feeling fitter and stronger in mind and body. And sometimes even fun :-) Most of them had never run before a month ago, but have already exceeded their own expectations of themselves. If you want to try us out, its free, please come and join us, drop me a facebook msg for details. You will be so welcome.

Testing the limits
You may know (because I’ve hardly stopped talking about it) that I ran my own lifetime longest run last week. I wrote a blog post about pushing the boundaries, but to be honest, running 36 miles in 3 snowstorms didn’t even touch me, didn’t even come close to testing my limits, either physically or mentally.

I had imagined that pushing my boundaries would involve putting one foot in front of the other until I broke or died. (wonky thinking, don’t try this at home). I had imagined that the only way I would know when I’d reached my limit was at the point of collapse.

Over the last few days my limits have been tested.

I reached my limit.

The good news is that today, during one of the most significant conversations of my life, I realised in one seminal moment that testing your limits is not about brokenness, but about transformation. Oh how I want to be tested, I have LONGED to be truly tested, to go through the fire and have something of worth remain. A life less ordinary. What’s left after the fire is what I’m after, that’s the treasure, that’s what I’m living and running for.

Immeasurably more
From this position, from this perspective, the boundaries are, well, unbounded, the heights and depths are measureless, the horizon is endless, and the transformation is limitless. So, come hell or high water, I am steadfast, I’m on a mission, and I will not be collapsing any time soon.

Danger, do not cross

“It's time to see what I can do
To test the limits and break through
No right, no wrong, no rules for me I'm free!”

So sings Queen Elsa – feels good doesn’t it, yay, FREEDOM, the gap in the hedge!!!!

“Young Icarus, overwhelmed by the thrill of flying, did not heed his father’s warning and flew too close to the sun whereupon his wings melted and he fell into the sea.”

On my monster 1066 Country Trail run this week (36 miles and 3 snowstorms later), I crossed a bridge over a river. The sign next to the bridge, hidden in a thorny tangle, said ‘Danger: Do not cross. If you do you will surely die’. (Ok so I may have made up that last bit). But the sign did everything in it’s power to dissuade me from crossing.

Unfortunately, (or fortunately, I still can’t decide), I’m not very good at recognising the time to quit, I’m not good at smelling danger, I’m much more likely to get overwhelmed by the thrill of flying.
You’ve heard it said, ‘Know your limits’. Not sure what mine are but as I was lost in a wide open space in a brutal snowstorm (Pevensey Levels, I hate you) I thought to myself that I still wasn’t at my limit. It has since occurred to me that in my wonky thinking, I wonder how I would recognise my limit. Basically, if I’m still putting one foot in front of the other, I haven’t reached it yet. The inference being that my limit is when I am physically broken or dead. I told you, wonky thinking!

So where do we look for the appropriate response to boundaries?

God opened my eyes to Psalm 16 v 6 not so long ago. “The boundary lines have fallen for me in pleasant places; surely I have a delightful inheritance.”

The word for ‘boundary’ here is ‘A district or inheritance (as measured); or a noose (as of cords);’ Guess which meaning I latch on to.

The wisdom must be in recognising safe boundaries that are in place for our good, knowing when to push them and when to stay well within them.

I am not so wise J


I’d love to be able to tell you that from now on I will appreciate that my ‘Boundary lines are set in pleasant places’ by a Heavenly Father who knows how to keep me safe. I’d love to be able to say that. But….. well the draw of the dangerous bridge and the overwhelming feeling of flying are just a little too appealing. Even if the price is that I finally reach my limit.

Apparently, “Bog snorkeling is a sporting event that consists of competitors completing two consecutive lengths of a water-filled trench cut through a peat bog in the shortest time possible.”

I can actually see the attraction. Sometimes it’s pretty fun getting wet and muddy and splashing the competition out of the water. But seriously, is this what I’m made for, is that my destiny, is it yours? Literally getting bogged down by sticky ooze dragging you deeper and deeper. Not me.

My favourite book of all time is A Pilgrim’s Progress, and I’ve been reading it again over the last few days (well, the children’s version with pictures!). At one point on his Journey, Christian gets swallowed up in the Great Bog Misery. Here’s the conversation he has with Faithful, the friend who pulls him out.

Faithful: “Why didn’t you use the steps? (calmly hauling Christian out the bog by the collar of his coat)

Christian: “I was running so fast, I never…. What steps?”

Faithful: “There are patches of safe ground – like stepping stones – right across the Bog. Don’t you have a guide book? There’s a map in there.”

Sometime during my sign-missing, map-forgetting glorious 1066 Country ‘Walk’ run last week I remembered a bible verse about paths and things. I read it again today. To be fair, I added the ‘bog-free’, but the sign and map bit is all God.

How can a young person live a clean, bog-free life?
By carefully reading the map of your Word.
I’m single-minded in pursuit of you;
don’t let me miss the road signs you’ve posted.
Psalm 119 verse 9

I can’t wait to run again tomorrow - 1066 Country Trail part B here I come. As ever, I’ll be running, believing in freedom from mud and dirt and sticky bogs.

Oh, one last thought. On his journey of a lifetime towards the City Of Gold, Christian meets an extraordinary cast of characters. Together with Hopeful, his steadfast companion, he survives snipers, mantraps, the Great Bog, Vanity Fair, Lucre Hill and Doubting Castle.

Come and run with me, it might just change your life. J
Posted by Jeychick at 02:18 No comments: Links to this post