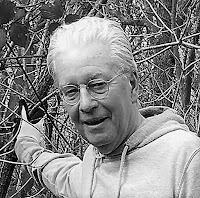 In early September 2017 I got an unexpected call from a man named Brian Basham. He’d seen my business card in a local running shop and needed someone to coach him to run the London Marathon in April 2018. After a short conversation, we agreed to meet.

As I sat opposite a white-haired slightly chubby old man reclining in a comfy armchair in his cottage in East Sussex, he explained that in his 75th year (he’ll be 75 in July), he wanted a new challenge. He also wanted to raise a load of money to support prostate cancer research Please donate here, many thanks for your support. He confessed that he was not a runner but did cycle a bit and occasionally ran to the lamppost down the road 90 seconds away! Oh, and there was also the small matter of his recent heart attack and the pneumonia he had suffered a few years ago that had floored him.

At no point did Brian ever ask “is this possible?”, or “do you think I can…?”, or even, which might have been the smart thing following a heart attack, “Do you think I should?”.

That’s the kind of man he is.

So we agreed to train together.

The Plan to reach the Goal
Brian was cleared by his heart doctor to go ahead and train, provided we kept his heart rate below a certain magic number. So step number one, invest in a smart watch with a heart rate monitor.

Having got that in the bag, it was time to plan the schedule.

Quality
If you’ve never trained for a marathon before, it’s easy to think that you need to run as far as possible, as often as possible. Brian was no different and assumed we’d set off on a rigorous 6 day a week schedule. This might be true for a Kenyan man in his mid to late 20s, but for the rest of us, it can be a recipe for fatigue and injury. In running, less is often more.

Recovery
Recovery from running sessions is vital and is even truer as we get older. So we settled on a plan of 3 good quality sessions per week with recovery days in between. Add in some cross training on the bike, a simple strength training routine to be done twice a week and we were good to go.

Variety
Another key element was to plan as much variety as possible. Mixing things up supports injury prevention, but just as important, variety is of course the spice of life. It's important in keeping interest and motivation up over the long training months ahead. This meant variety of shoes (Brian has two different pairs), variety of surface (road, trail, track, treadmill), variety of pace (easy, steady, quick) and variety of intensity (short fast hills, long easy flat).

Armed with the plan, we set out for our first run.


Come and run with us, it might just change your life
Posted by Jeychick at 05:10