We'd rather turn to no-one than the church. 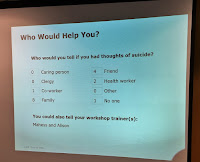 If you’re feeling like you want to die, Get Help Now

Yesterday while out for a run with a client we were talking about church. I laughed and told her I wasn’t allowed to go to mine. I told her my story and how it lead, in part, to my suicide attempt. I don’t think I spoke badly about the church except to say that they were mistaken in how they handled things. I recounted that when I trained for my ASIST suicide prevention certificate, I had broken down in tears, how when the trainer asked if I had any support I broke down even further because I had lost my church family.

Of the many things I’ve learned about suicide, a real big one is that isolation is dangerous.

Also on the ASIST course I had a revelation - that rather than stay bitterly hurt and angry at the church for not listening to my screams, the solution was in education. They had acted in love, but in ignorance, and I have spoken to too many others who’ve had a similar experience.

That photo above shouts out the problem and this same pattern is repeated hundreds of times over - people who are struggling to cope with suicidal thoughts do not turn to the church. In fact, they would prefer to tell no-one.

If the church really is God’s solution, and I believe it is, then something is terribly wrong, but what can we do about it? Well, we've stared by launching RunningSpace
At RunningSpace we are returning to that original goal of Running to beat suicide. How? By educating communities in
Walk2Run
safeTALK, focusing on Christians (who are the church, I don’t give a crap about denominations or buildings) and by
Running in the Gap adventures.

I’ve been guilty of watering down the RunningSpace message in order to be ‘inclusive’ – but really, there are more Christians in the world that I could possibly run with or educate!

2018 has been a huge learning curve and there have been many successes. More importantly, lives have been saved and changed.

In 2019, we need your help. Would you please pray for doors to open for us so that we can educate and train churches, communities and individuals in Walk2Run and safeTALK.
Please help us pray and intercede for anyone affected by suicide as we run our first Running in the Gap adventure from Bexhill to Canterbury in the spring.