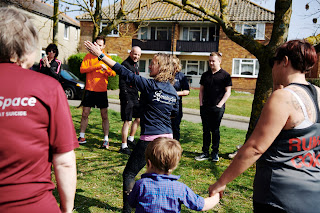 RunningSpace began in 2016 with me volunteering to teach a group of six non runners how to run. In the three years since, we’ve trained over two hundred people, eighty percent of whom were completely new to running.

Many participants have been affected by suicide, including me – either attempting to take their own lives or having lost family or friends to suicide. Other attendees live with mental health conditions, from anxiety and depression to schizophrenia and autism.

We have trained over a hundred people in safeTALK, a World Health Organisation (WHO) ratified suicide prevention training programme. We are now looking ahead to the next steps in order to fulfil our mission.
Mission Statement
Our passion and calling are to see every life lived in all its fullness and not one be lost to suicide.
How will we achieve this?


We believe that “every person we run with has treasure and riches within them, often buried deep under hurt and pain of abuse, abandonment, and rejection. Our purpose is to run shoulder to shoulder with you, and in running to help shake the dirt off each other’s lives and pull out the treasure.”

The WHO estimates that each year approximately 800,000 people die from suicide. This means that someone dies by suicide almost every forty seconds. For every suicide there are an estimated twenty attempts: every two seconds someone in the world is trying to kill themselves.

RunningSpace currently delivers five Walk2Run groups per week across Bexhill and Hastings, we have trained up three new coaches from within our own ranks, with a further six are about to begin their own coaching journey. Of those nine, at least six are survivors of suicide. Sessions are completely free including refreshments. Many people struggling with suicide and mental health are also struggling financially.

Almost since inception, we have been based at The Pelham charity in Bexhill with whom we share the same vision, to see people restored. The Pelham is a Christian endeavour, recognised for its contribution towards all aspects of health and wellbeing. RunningSpace has recently been adopted as a partnership project of the charity, a mutually supportive relationship that enables us to offer connection, volunteering and other training opportunities, as well as a shared infrastructure and support through the CEO and The Pelham Trustees.

We are based in Bexhill, but of course suicide happens everywhere. We have received requests to help people set up their own Walk2Run groups to beat suicide in other areas of Sussex and the South of England. We plan to

You can support the ministry by visiting our website RunningSpace.org and clicking on the Give.Net button, or this link will take you straight there.

Many many thanks for your support in advance,

Jacky and the team