On Saturday 28th October 26 year old Sam Brown from Sidley, Bexhill completed the Beachy Head Marathon, 26.2 miles of gruelling but beautiful off road running. So did 2157 others and of course everyone that crossed that finish line is to be admired. But Sam’s achievement is particularly remarkable because in May this year he tried to end his own life.

Sam’s story starts 12 years ago on what should have been a normal bank holiday Monday afternoon in Eastbourne. He was attacked by some young people who assaulted him and photographed the incident.

This horrific attack deeply affected Sam and his mental health. He recounts that he felt unable to leave the house for several years afterwards, and found it difficult to trust people. He suffered feelings of anger and fear, and not surprisingly perhaps, became very depressed.

Walk2Run
But in 2015 Sam’s life began to take a more positive turn. With support from family and friends he started volunteering at the Pelham in Sidley, working in the new kitchen washing up and preparing delicious food for customers. It was here at the Pelham that I first met Sam. I run an organisation called Walk2Run based at The Pelham, which teaches people how to run to support their mental, physical and social wellbeing. Encouraged by friends Sam came out for his first Walk2Run session.

This is Sam in the grey t-shirt at Walk2Run at The Pelham back in September 2016.

I’d like to write, ‘the rest is history’, because Sam basically became an unstoppable running force. He came to Walk2Run every single Friday morning, taking to running like a duck to water, and it wasn’t long before he started entering local races.

However, in the spring of 2017, illness and the anniversary of the attack triggered suicidal feelings in Sam and he made several attempts to take his own life. Thankfully he was helped by his dog Crystal who alerted passers-by. Sam remembers too the kindness of strangers who heard Crystal barking and contacted the police, and Sam was then able to get the help and support that he so desperately needed.

And he kept running. He also joined a local fitness class called Total Nutrition where he regularly breaks his own plank record, currently standing at longer than 16 minutes!

On 1st October he ran the Eastbourne 10k, which meant returning to the place of the attack. In Sam’s own words before the race, “I’m feeling really nervous and excited now and I can't wait to race and I ain't been to Eastbourne for 7 years now cos to much bad stuff happened to me there so I'm really going out my comfort zone.” He crossed the line in 46 minutes. “I'm really proud of myself and it was amazing feeling when I crossed the finishing line and thank you everyone today for the nice messages”.

4 weeks later Sam was back in Eastbourne toeing the line of the Beachy Head marathon. Friend and training buddy Rob Thomas joined him for the event and comments “I am very proud of Sam. Beachy Head is no easy option for a first marathon. Sam has shown remarkable mental and physical strength with both his planning and performance on the day, I am sure he will be even quicker at his next running event!” 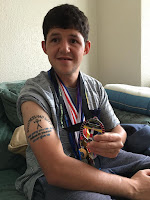 Shame replaced by pride
As for Sam, he says that running and fitness have had a massive impact on his life. He’s made new friends, he’s lost over 4 stone in weight, his confidence has grown so much that he recently lead a fitness class on World Mental Health Day raising £220 for Together Wellbeing. And these days, rather than being too ashamed to leave his house, Sam is now proud of himself.

His motto for life is now proudly tattoed on his arm. It says “Keep going, you can do it, believe in yourself, never give up.”

Sam, you’re an inspiration. Keep running, you’ve not given up yet, proving to us all that every step counts.

Come and run with us, it might just save your life.